This data set is from an HCS experiment to characterize how camptothecin affects cell cycle progression.

Cells are treated with camptothecin for 24 hours at a gradient of concentrations: 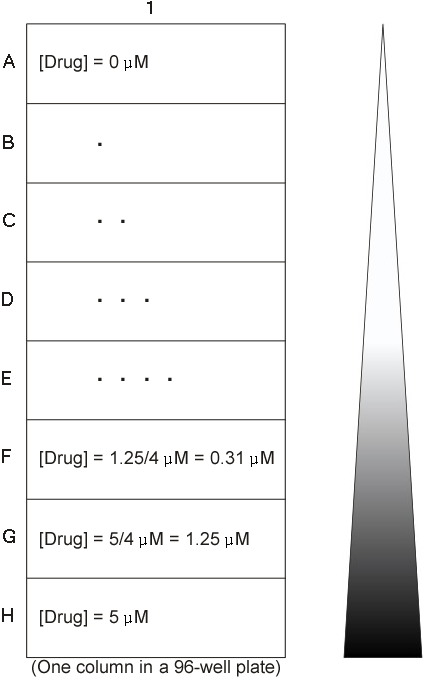 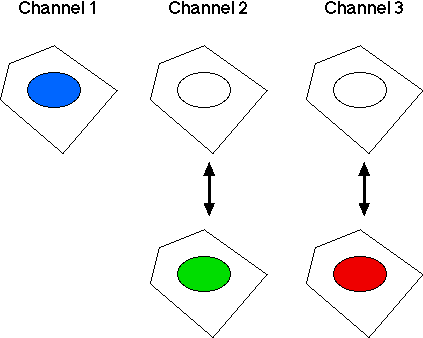 Since we are looking at the effects of a cell cycle drug, the first thing to look at would be the DNA content, our first channel. In the following 27-second video, we create a trellis of histograms of DNA content.It is clear from the trellis graph of DNA content in the video that camptothecin has different effects on cell cycle progression at different concentrations. The "2N" and "4N" peaks are quite distinct in the the upper 5 panels. The distribution of DNA content in each panel also spreads out quite a lot. This is because the particular cell line used in this experiment shows a wide range of chromosome numbers.

Much like we did for the second channel, we can get a boxplot with Well as the X variable and Nucleus Intensity (pRb) in log scale as the Y variable: 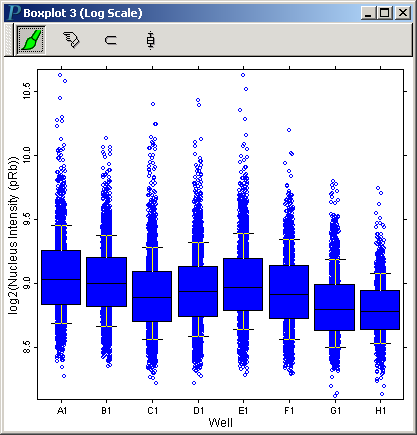 This boxplot clearly shows that as the concentration of camptothecin goes up, the level of pRb goes down.

In the rest of this tutorial, we'll take cell cycle into account to see how p53 and pRb are affected by camptothecin.

Here we will divide all cells in this experiment into 3 categories:In the following 23-second video, we will do all of the division graphically by making a histogram of DNA content of all cells and using a paint brush:What we just demonstrated in the above video is essentially equivalent to creating on the fly a new categorical variable with 3 categories:

Now we have divided all cells into 3 groups, each corresponding to one phase of cell cycle. We can visualize this information on p53 responses, phases of cell cycle, and drug concentration with a trellis of boxplots. Because Panmo treats each plot as a viewport into the data space and allows us to retrieve any data visible in a viewport, we can use the data in the histogram at the end of last video to make this trellis of boxplots. The following video runs for 1 minute.It's clear the patterns in the G1 and H1 panels (subject to the highest camptothecin concentrations) are distinctly different from those in other panels.

Following similar steps, we can easily get the following trellis of boxplots:

Note that the pattern in the H1 (subject to the highest camptothecin concentration) panel is distinctly different from those in other panels.

Finally, we are going to take drug concentration and phases of cell cycle into account to explore the relationship between p53 and pRb. We do so by making a trellis of scatterplots of p53 versus pRb in the following 25-second video:
Copyright ©   2001-2021   The Chi-Square Works, Inc.