This data set is from an siRNA transfection experiment, in which the TNF-R (Tumor Necrosis Factor Receptor) is knocked down by siRNA.

Cells are first transiently transfected with siRNA specific to TNF-R.

There are a lot of downstream effectors in the TNF signaling pathways. We are only looking at 2 of the downstream effectors; hence, a much simplified diagram is drawn here. One target is NF-kB, which moves from cytoplasm into nuclei when it becomes activated. The other target in this experiment is ATF2, also a transcription factor. It also moves from cytoplasm into nuclei when stimulated.

Cells are then treated with TNF for 0, 15, 30, and 45 minutes before being fixed and processed for examination. 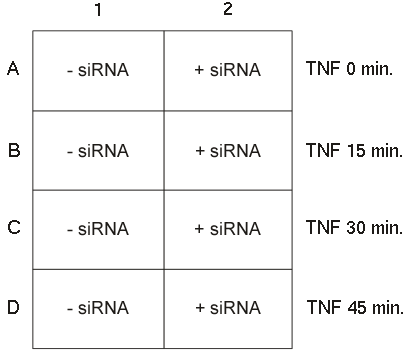 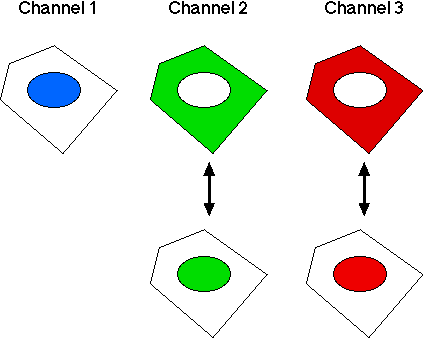 Numbers of Cells in Wells

We'll next take a look at the cytoplasm-to-nucleus translocation of NF-kB in cells in all wells in the following 8-second video.It is clear that NF-kB becomes activated quite early on after TNF treatment. Its level in nuclei stays high even after the 45 minutes of treatment. We can easily see here that the nuclear translocation of NF-kB in those cells transfected with the siRNA is reduced quite a lot.

We'll take a look at the cytoplasm-to-nucleus translocation of ATF2 in cells in all wells in the following 9-second video.The level of ATF2 in nuclei also jumps up quite fast but obviously its increase in nuclei is more transient, compared with NF-kB. We can see that its level in nuclei goes down quite a lot at the 45 min time point.

Since siRNA transfection is not homogeneous, does it make sense not to examine subpopulations of cells with altered responses?

We all know that the transfection efficiency in siRNA experiments is never 100%. That is why people call it siRNA knockdown, not siRNA knockout. Let's take a look at the boxplot of NF-kB translocation again. We can see that the NF-kB translocation of red cells in wells B2, C2, and D2 is suppressed. but it is never as low as that of untreated cells in A1 and A2. Why is that? Because now wells B2, C2, and D2 contain mixed populations of cells. Some cells still respond normally to TNF but some don't. Those cells that don't respond to TNF normally have their TNF receptors knocked down more. Can we examine those cells to see what happened to their other downstream effectors? Sure, with Panmo, it is quite easy to do so.

Here we are going to visualize the data in the boxplot of NF-kB translocation from a different viewpoint by making a trellis graph of histograms. After that, we'll take out all the siRNA-transfected cells in a well and explore how ATF2 was affected by the siRNA and how NF-kB and ATF2 relate to each other.
Copyright ©   2001-2021   The Chi-Square Works, Inc.